Today is International Women’s Day (March 8) and the focus this year is #PressForProgress emphasizing the need for gender parity in the workplace.  As this day is about celebration, advocacy and action, my blog today will focus on gender parity in eDiscovery and celebrate TCDI for its commitment to this goal.

International Women’s Day (IWD) is globally celebrated in countries from Afghanistan to Zambia – from strikes to demonstrations, walk-outs to ad campaigns, the world today is talking about women and our places and roles in the workplace.

Since the first Nation Women’s Day back in the early 1900s, there has been significant improvement in women’s equality and emancipation, but gender parity still remains a huge issue in the higher ranks of most companies. I’ve been lucky enough in my career to have quickly ascended the corporate ladder, but I have definitely encountered gender-bias along the way.

Pay equality was always a top priority for me, as was holding similar titles to those around me. To achieve both pay and title equality, I’ve often had to switch between ladders in order to reach the next rung and I’m pretty confident that I had to do that because of the lack of gender parity at senior levels commonly seen in the eDiscovery industry.

In eDiscovery or Legal Support, it’s common to see women in Project Management, Sales and Senior Manager or Director roles, where people and client management are key components of the position.

It is rare to see women in eDiscovery holding developer roles, traditional EDD positions processing or hosting data, or in forensics roles.  It is even rarer still to see women in leadership roles within those departments.

The principal finding of Women in the Workplace, a study undertaken by LeanIn.Org and McKinsey in 2015, is that women are underrepresented at every level of the corporate ladder, with the disparity being greatest at senior levels of leadership.

That report estimates that it will take 25 years to reach gender parity at the Senior VP level and more than 100 years to reach equality in the C-suite.

This is my first International Women’s Day here at TCDI, as I recently crossed the 6 month employment mark.  I am happy to report that TCDI doesn’t need the 100 years, we have already reached gender parity in the C-Suite and at the management level.

Here’s a quick look at our leadership numbers:

Our CFO, CMO, President of Litigation Services and Owner/EVP are all female leaders.  Our President, CEO/Owner, GC/EVP and COO are male leaders.  Together we make up a great working team of men and women focused on increasing equality within our ranks.

Another incredible statistic here at TCDI is that 67% of our team members holding traditional EDD roles (processing, hosting, running productions, setting up sites, etc.) are women and our head of QA on the Dev team is also a woman.

Having worked at five previous EDD companies, I have never seen numbers like that in those roles – so that statistic is especially exciting for me.  I previously held an SVP of EDD title and I can tell you, people were always surprised I was leading that group and the teams I led were 90%+ comprised of men.

Outside of TCDI, many global corporations are doing some very cool things to show their support of gender equality today.  Most notable to me are: 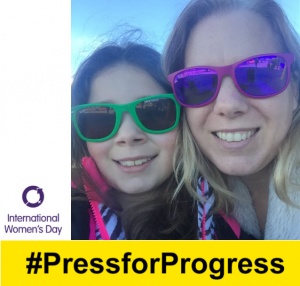 Talking with my daughter today, who is home from school due to the winter storm ELSA, she believes that girls are equal to boys, in every way.

And while I’m happy she feels that way (gender parity is strong in my house– everyone takes the garbage out, everyone shovels the 20” of snow, everyone does laundry), I did tell her that there is still a long way to go, as the McKinsey report points out.

I told her that women on average still make 82% of what men make in the same roles, and that most companies have not achieved gender parity in leadership roles as TCDI has done.

I was very proud to tell her the stats that we have at TCDI and the role I play on the executive team. I think she was encouraged by this.

I do hope that in 25 years, when my now 10 year old daughter reaches the Senior VP level, she won’t see a glass ceiling or experience gender bias as I, and most of my peers, have experienced. And I hope the C-Suite disparity takes a lot less than 100 years to correct, because I’d love to live in a world where people like Marissa Mayer (former CEO, Yahoo), Indra Nooyi (CEO, Pepsico) and Margaret Whitman (former CEO, HP & EBAY) don’t make the front-page of papers and sites because they are women leaders. It’s be great if it was so common that it went unreported. That’s what I hope for my kids, for both my son and daughter.

Today I celebrate with my daughter and I am proud to be part of TCDI, a true leader in gender parity.

As the Catalyst Skyline campaign says…. Let’s build a future where we use 100% of the talent, 100% of the time. It’s good for business, and it’s the right thing to do.